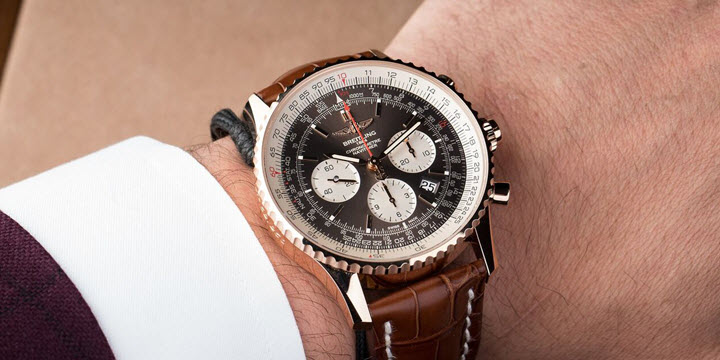 Swiss watch manufacturer Breitling has developed a reputation as one of the finest watch-making brands in the world, with a particular reputation for creating chronometers and aviation watches. Like many other brands, they tend to showcase new models at the annual Baselworld event.

While media coverage of the Baselworld Fair naturally focuses on the biggest brands, like Rolex and Omega, the release of three new Breitling models was able to capture the imaginations of many of those in attendance for the 2017 event. In this article, we take a much closer look at those three new models.

The Breitling watch that attracted the most headlines after Baselworld 2017 was undoubtedly the Navitimer Rattrapante. Indeed, the brand used its signature Navitimer collection to launch its first ever in-house split-seconds chronograph movement – Caliber B03 – which is protected by two patents and boasts a 70 hour power reserve.

A second button push then allows the split-seconds hand to catch up with the still-running main chronograph hand. In addition to a primary steel model, a limited edition red gold version is also available. Both models feature a 45mm case, and share other features too, including a date display window between the 4 and 5 o’clock positions.

The watch is available with two different modifications. The first utilizes a Caliber B20 movement, which is actually a modified Tudor Caliber MT5612. This setup is available with either a 42mm or a 46mm case. The alternative is a 46mm Chronograph model, which is powered by the Caliber B13 movement instead.

One of the main aesthetic changes to previous Héritage models is the addition of a new steel bezel with a ceramic inlet. A number of different dial colors are available, including black and tropical brown, while the hour hand has a triangular tip, serving as an homage to the early Superocean timepieces.

Finally, Breitling also showcased a special limited edition version of the Avenger Hurricane model that was revealed back in 2016. The primary change to the watch is its color scheme, with the white hands, indexes and numerals being changed to an off yellow tone instead.

Much like its predecessor, the new Avenger Hurricane Military benefits from an ultra-light polymer case ,a material the company has dubbed ‘Breitlight’. This material is more than three times lighter than titanium, more than five times lighter than steel, but is actually harder than both, ensuring the watch is also robust.

The watch retains trademark features of the Avenger Hurricane, including its 24-hour time display and oversized 50mm case diameter. It also remains powered by the Caliber B12 self-winding movement. Due to its limited edition production run, only 1,000 units have been released for sale to the general public.

» Find the Lowest Prices for your next Breitling Watch here «